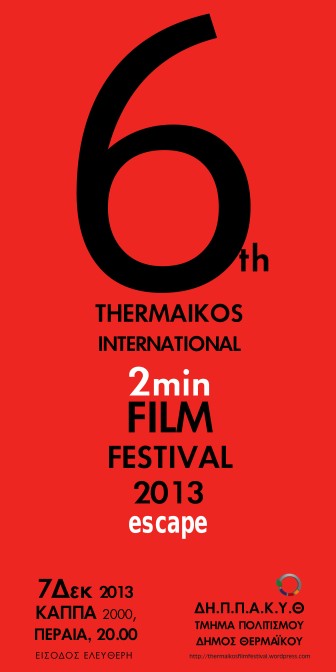 We would like to thank all the film authors and the audience for their support!

It was an exciting night! Looking forward to the next edition…

The initial, original idea for a 2min Short Film Festival was born in the offices of the Cultural Centre of Thermaikos Municipality (Thessaloniki, Greece) in the summer of 2008 by a group of young employees. The deeper, internal motivation was the belief that culture and the arts are a necessity, not a luxury. The same team continues until today to organize and manage the Festival.

The driving force beneath this idea for a cinematic project was our desire for something new, innovative, provocative, alternative, different and kaleidoscopic, something which could rejuvenate the cultural life of Thermaikos Municipality. This idea evolved, matured and formed as the “Thermaikos International 2min Film Festival”, with Autumn 2008 being the starting point. A Festival which appeared “Out of the blue” in 2008, caused “High Tension” in 2009, led to a “CINErgy” in the 3rd edition of 2010 and followed “CINE-tracks” in the 4th edition (2011), screening exciting film minutes from all over the world, capturing the imagination…

Greek and foreign film makers have supported the Festival through submissions of their film works and many cinephile dwellers of Thermaikos Municipality have empowered the whole project through their presence, attendance and positive comments.

We hope this creative, fruitful CINErgy between the organizers, film makers and the audience will sustain…